I truly never really thought the day would come that I would have them all! A few years ago, it seemed pretty hopeless—three of the “Big Six” were on my “need” list and now I have them all. This little gem arrived on my doorstep yesterday: 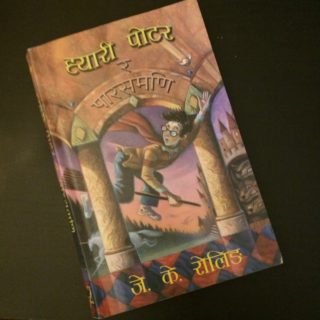 I feel a little faint!

This is a collection that started in September 2001, when I bought my first translation (Japanese) in San Jose, California—a friend and I went to visit another friend to go see “Sorceror’s Stone” which had just opened. 17½ years!

Nepali has been particularly stuck in my craw because I had been corresponding with the publisher when the book was in print. But for some reason—honestly, I have no idea why—they said “we cannot deliver outside Nepal” and they were completely rigid about that; even when I [nudge,nudge,wink,wink] offered to cover the costs of any “additional effort”.

At least Greenlandic and Macedonian were well out of print by the time I was seriously trying to acquire them.

You see, in the early days, I had “rules”. I have some serious compulsive collecting issues; knowing this about myself, I also know how to manage them. I am very careful about committing to a collection—it must be meaningful to me and it must be a (relatively) closed set (i.e. not something like stamps or coins—something that it is within the realm of possibility to complete). I also define rules to keep myself from going crazy: in this case, it started with “languages I have studied or from countries I have visited”. I started without the intent to get all the translations, but just to get them as souvenirs of travel.

In 2004, I started working for a company that made predictive text-messaging software as the head of the Linguistics department. We more than supported 60 languages and I expanded my rules to “any language my department was actively working on”. After I stopped working there about ten years ago, my collecting went on a bit of a hiatus—not completely, but since I was struggling starting my own company, there wasn’t a lot of spare time or cash around and other priorities took over. I started collecting again in earnest—no rules this time!—about five years ago and, of course, I missed the boat on a few books in that period.

I owe a debt of gratitude to all the people that have helped me get to this point and the community of collectors on Instagram—particularly @thepottercollector and @mcallister_alaskagrown who, really, are responsible for finding the last books I needed for me! Thank you so much!

Naturally, people will wonder if I’m going to continue with the subsequent books, and the answer is NO! I’m done! I am content with my collection as it is (aside from maintenance of course). Instead, I am going to focus on this site and The List and cataloguing editions. I have been working in my (dwindling) free time, to build a sophisticated database structure tailored to the collection of Harry Potter books. One that allows for tracking for all the crazy criteria that we as collectors think is important and one that can capture the linguistic nuances that I care about. And then of course, I need to populate it a build some tools on this site to access and contribute to it.

That, I think, will satisfy my collecting drive—I’ll just be collecting information instead of physical books that I
don’t have any more space for—and at the same time, I think it is a more valuable contribution to our community.