Harry Potter and the Nepali Spelling

Completing my collection of translations of the first Harry Potter book meant I finally got my hands on a copy of the authorized Nepali. And that means I was able to resolve a question that has been scratching at the side of my brain lately… how do you spell ‘Harry’ in Nepali?

Take a look at these details from the unauthorized (first/left) and authorized (second/right) covers:

There’s a subtle difference there that is pretty easy to miss—but is it meaningful?

The unauthorized title is unambiguously:

But in anything you can find online, “Harry” is spelled almost exclusively:

The difference between these two is that the first two characters are ‘ligatured’ together. In Nepali’s script Devanagari (also used by other languages like Hindi and Marathi), each character has an implied vowel ‘a’ unless otherwise specified. So, by itself, ह is pronounced ‘ha’. To change that vowel, you add other vowel characters that join it, for example ही is pronounced ‘hī’. The vowel character combines with the consonant to create a ligatured character that for all intents and purposes is treated like a single character. For example, if you try to select it with your mouse, you will not be able to select the consonant and vowel separately from each other. If you copy and paste it into an editor, position your cursor before the character, one → takes you past both. If you try to enter a vowel character without a consonant, you will see a little dotted circle indicating that the character should be joined to something like this:

If you have a consonant cluster in Devanagari—i.e. more than one consonant in a syllable that is not separated by a vowel—you create a ligatured character that is a combination of the two consonants. Sometimes it is obvious what the characters in the ligature are—they tend to be visually similar—but not always. Computationally, this effect is created using a special, often invisible diacritic called “virama”. Traditionally, if someone writing in Devanagari needed to write the equivalent of just ‘h’, they would add a little stroke below the character like this:

That stroke is “virama” whose purpose is to tell the reader to suppress the inherent vowel ‘a’ on that consonant. When working out how to write Devanagari on computers, programmers decided to exploit the virama to indicate when two consonants should be ligatured together as well.

So let’s take another, more detailed look at our two spellings of ‘Harry’:

So the question remains, what’s going on with the title on the authorized cover? Is that unligatured ‘hayā’ or ligatured ‘hyā’ or something else entirely? I’ve been waiting to have the actual text to tell me because (Urdu and its font problems aside), I’d expect that how it’s spelled in the books is how it would be spelled on the cover. And, the verdict is… 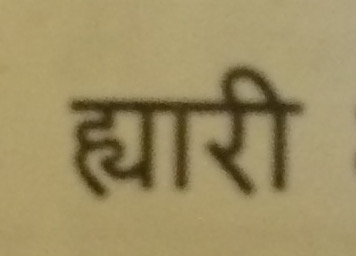 This is actually what I suspected—that there is variation in how fonts render the Devanagari ‘hyā’ ligature. It seemed more likely than a font arbitrarily making two characters touch creating some ambiguity, and also more likely than something completely different. Combined with the fact that it seemed the preferred Nepali spelling online was ‘hyā’, I was heavily biased towards that interpretation. However, this is the kind of thing that is extremely difficult to research online in English when trying to find an answer—it’s the kind of thing that native speakers just take for granted and possibly aren’t even aware of let alone writing about! If you don’t believe me, take a moment and consider how you write the letter ‘g’. Then take a really good look at the ‘g’ you’re reading right here! How aware were you that that ‘g’ looks nothing like the ‘g’ you would have written?

One last note about the two Nepali spellings of “Harry”—why is this variation there at all? Shouldn’t there only be one obvious way to pronounce the English borrowing of “Harry” in Nepali? The answer is probably: yes, there probably is only one way to pronounce Harry in Nepali. But remember, that there is often a very wide gulf between how something is written and how it is pronounced! I gather from what I understand of Nepali phonology, both spellings of “Harry” would ultimately be pronounced the same in Nepali. Why they decided that ‘hyā’ was a better way to go for the authorized translation than ‘hayā’—that I can’t tell you; that comes down to aesthetics. We’ll have to ask some native speakers for their opinion!