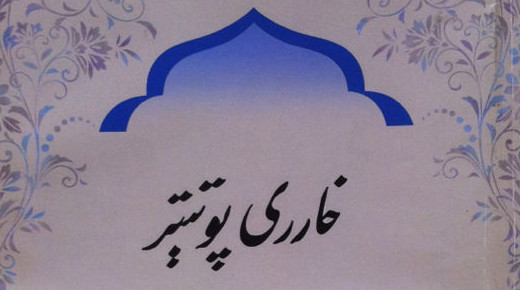 Harry Potter and the Uighur Enigma

ThePotterCollector came to me with an intriguing photo of a book the seller claimed to be a Uighur translation of the Philosopher’s Stone (obviously unauthorized). Unfortunately, these are the best images available and most of the text is not very legible. Is it enough to say with any confidence that this is what the seller claims it to be?

The first things to note:

1 and 3 lean slightly to the “con” side of the argument, but aren’t conclusive in any way. 2 is to be expected: Uighur is a Turkic language that is written with the Arabic script so it shouldn’t look like regular Arabic just like you would expect Turkish to not look like English or French or Vietnamese or any other language written with the Latin script. 4 seems a little odd, but not terribly surprising given that most Uighur speakers are in the “Xinjiang Uyghur Autonomous Region” of China. So 2 and 4 slightly leaning “pro”, but again not very conclusive.

The Arabic text in the smaller images is totally illegible, at least for a non-speaker, so we have to focus on the cover.  One is naturally drawn to the title:

But that first character! Anyone with a cursory understanding of the Arabic script (in Arabic) would be like “what the heck is that ‘b’-lookin’ thing?” They would also realize that this is clearly pretty stylized text; possibly even hand-written. So… maybe let’s look for lower-hanging fruit.

The text at the top is interpretable, even if some of the fine detail is missing:

And there are a couple of things that immediately stand out. First, the character that is circled in the second row on the left is the least ambiguous. It is pretty clearly:
ۆ

This is a character romanized as “oe” or “ö” that is only used in Uighur, Kurdish, Kazakh and Azerbaijani. Azerbaijani has not been written with the Arabic script since 1922, so we can ignore it as a possibility.

Next, there’s a similar character on the top row, the second circled one.  It’s a little harder to tell what’s going on above it, but it looks most likely to be a cluster of three dots making it this character:

This is a character romanized as “v” only used in Uighur and Kazakh, so we can rule out Kurdish as a possibility.

Lastly there is the first circled character on the top; that’s pretty unusual. Not many characters in Arabic have tails that go to the right. A quick look at a the Uighur alphabet though and you can tell it is:

a complex ligature of the letters ا, “alef”, and ئ, “Yeh + hamza” romanized as “a”. This is a character unique to Uighur and Kurdish, so we can rule out Kazakh as well. That leaves just Uighur as the most likely candidate for the language.

Back to the title and the ‘b’ thing…

with a little more context from looking at the text above, it’s not a big leap to see that the ‘b’ is actually the same ئا that is the first circled character we just examined. With a big fat calligraphy pen, “hamza”, the little diacritic, is a pretty difficult shape to make. For a native speaker, replacing it with a ‘dot’ is not going to be very confusing and closing the the bowl can be written off as a stylistic liberty.

The last two characters (reading right to left) with dots above and below are pretty obviously two complex ligatures and it takes a second to realize that they are on a bit of a slope. I.e. if they were typeset, you would expect the ligatures to stick to the baseline a little better, but they start high on the right and swoop down to the left as though written on an angle. Again, stylistic liberty; but once you realize that, they look a little more normal. In Arabic, extra points usually indicate a letter and what that letter is often indicated by the dots. So counting those, will give you a starting point of how many letters you’re looking at.

Based on that, in the first (again right to left) complex ligature, you can guess there are two letters (two groups of dots) and in the second three (two groups of dots plus the longer tail at the end that extends beyond the dots).

The dots below provide the best starting point; three dots below is not very common in Arabic and in this context that has to be a پ, “peh”. Two *vertical* dots stacked underneath is even rarer, and actually gives us further evidence that this is Uighur. It can only be a ې, “e” or “ë” which is only used in Pashto and Uighur. Side note: this is rare because in the Arabic script, most vowels are not explicitly indicated; an artefact of the structure of Semitic languages which makes ignoring vowels less confusing. That doesn’t work so well for Uighur and so, unlike Arabic, all vowels are specified when writing Uighur.

Most of the remaining characters are standard Arabic script; the last leap that one has to make to understand the title is with regards to the character ligatured to پ, “peh”; it looks like

but that is not a character used in Uighur. However, given the stylistic liberties already taken, it’s not unreasonable to interpret that character as

especially once we put it in the context of what we already have worked out.  I believe that the text in title is:

Which transliterated to Latin is:

This is a plausible transliteration of “Harry Potter”. There is no /h/ sound in Uighur so it is not unusual for it to be dropped. The double “r” is actually kind of weird; it’s really just an artefact of English spelling which is not usually carried through into transliterations. You would expect that if they went to the trouble of doubling the “r”, they would also double the “t” in “Potter”, but it doesn’t appear to be. There are plausible explanations for this though: perhaps the double-r disambiguates Arri from another Uighur word. It’s also possible that my interpretation of the title is not correct; an examination of the actual book would conclusively decide it.

One way or another, though, I’m comfortable saying that it is a book about Harry Potter.

Is it the Philosopher’s Stone though? The text at the bottom of the cover would probably tell us but it’s also stylized, fuzzy and not easily interpretable. Plus, whereas transliterating “Harry Potter” is illuminating because it is borrowed from English, transliterating the text there is likely less informative unless one actually spoke Uighur.

A quick search seems to indicate that “stone” in Uighur is tash which is a cognate of the Turkish taşı or taş from the Turkish titles. In Arabic script that would be:

although undoubtedly inflected.  From a cursory inspection, it doesn’t really look like there are good candidates for a match in the text at the bottom. Time to move on from the cover. The Chinese text is the next best place to look.

Based on my analysis ThePotterCollector decided to get the book and he kindly promised me the opportunity to check it out! So there’s a good chance there will be an update in the not-so-distant future.

A completed collection is always cause for celebra

Azerbaijani Deathly Hallows is out! Bizarrely does