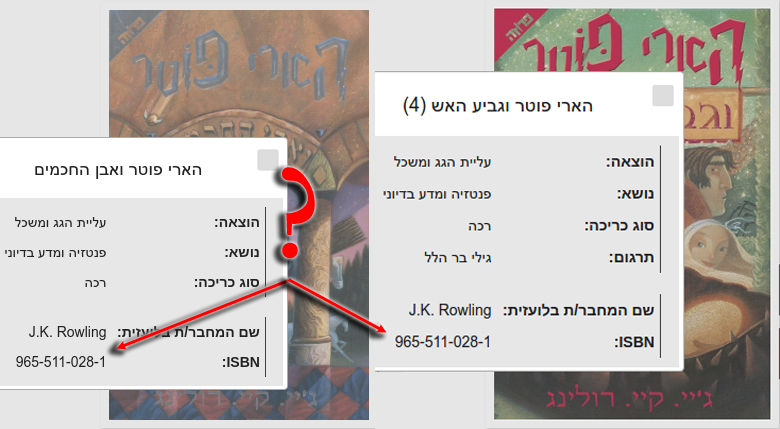 It’s not entirely clear why this is the case, but the Hebrew ISBNs are messed up, particularly for Philosopher’s Stone, which doesn’t appear to have it’s own unique ISBN and has been published under duplicate ones. Even now, the publisher’s website has both Goblet of Fire and Philosopher’s Stone under the same ISBN.

I think that the best strategy to take for determining what is “correct” (to the extent that that is meaningful) is to observe what is “most unique” (since the goal of an ISBN is to provide unique identifiers for books). For example, even though 9654487659 apparently appears in printings of Philosopher’s Stone, Chamber of Secrets and Half Blood Prince, Chamber of Secrets has only ever been observed with that ISBN, whereas the others have been observed with other ISBNs. So even though Philosopher’s Stone likely used it first, it most uniquely identifies Chamber of Secrets. This also corresponds to what the publisher says.

That leaves us with one very unsatisfying conclusion though; that Philosopher’s Stone simply doesn’t have an ISBN. Nonetheless that provides the most clarity.

So, below is a table of what you can expect to find out in the wild along with my best judgement about the validity of each. I’ll update it with new information as it becomes available; contributions encouraged of course!

Thanks to @alltheprettybooks for pointing out the issue in the first place and @thehpcollection for contributing data!

1. Confirmed published with this ISBN by visual inspection
2. Unconfirmed; reported by used-book websites
3. Reported by publisher